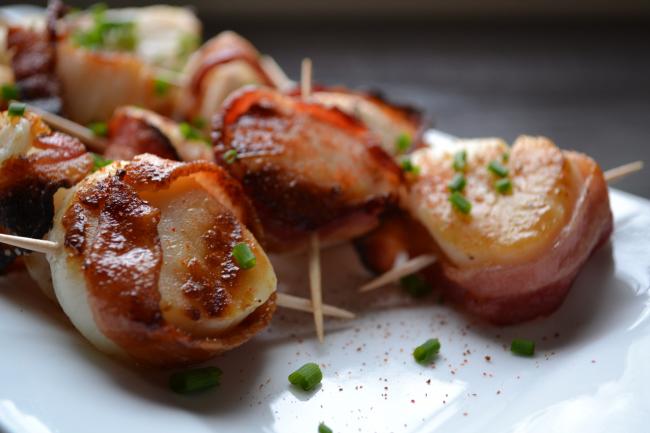 Shellfish, Can Be Prepared Ahead

Place an oven rack 6 inches from the broiler element and heat the broiler. Line a broiler-pan bottom with foil and cover with the slotted broiler-pan top.

Start with 6 pieces of bacon. Spread them out on several layers of paper towels on a microwave-safe plate. Cover with two more layers of paper towels. Microwave on high until the bacon fat begins to melt but the bacon is still pliable, about 1½ minutes. Cut the bacon pieces in half lengthwise, then cut each bacon half in a piece long enough to wrap a half scallop—ideally, each piece will wrap two scallops. If the bacon is too short, microwave enough additional bacon to wrap all of the scallop halves. You may have some extra bacon (which you can finish cooking in the microwave and hand out to people who are hanging out in the kitchen).

Salt and pepper each side of the scallops. Wrap a piece of bacon around the middle of each scallop half and place on the broiler-pan top, pinning the bacon ends underneath the scallop. Broil until the scallops are just cooked and the edges of the bacon are brown, spinning the broiler pan around halfway through cooking, about 5 minutes. Skewer the bacon-wrapped scallops with toothpicks and transfer to a serving platter. Sprinkle with cayenne pepper and chives before serving.

Remember to reduce the microwave cooking time if you are cooking less than 6 pieces at a time. For three pieces, we cooked the bacon for 1 minute. And watch the bacon carefully when it is under the broiler—some of it may crisp very quickly.

Don't worry about perfection. The bacon may not be perfectly wrapped around the scallop or part of the bacon may burn while broiling. You can fix the bacon-wrapping problem with the toothpick (though toothpicks and very crispy bacon don't mix - just do your best to make it look good). If the bacon burns, just break that piece off.

The cayenne pepper goes a long way, so be careful. You may want to make a few without the pepper for your guests that don't do spicy.

This recipe can also be made with shrimp instead of the scallops. Use 24 extra-large shrimp (1 pound), peeled and deveined.

You can prepare the wrapped scallops earlier in the day—cover the pan with plastic wrap and put in the refrigerator until ready to broil.

Sturdy toothpicks or other fun skewers.

The Big Game
sign in to save to favorites

Kosher v. table salt
We always use kosher salt in our cooking because its crystals dissolve better in water than ordinary table salt. However, kosher and table salt are not equivalent when you are measuring amounts for a recipe. To further confuse matters, different types of kosher salt measure differently. If a recipe calls for table salt (or just salt), and the amounts are relatively small (e.g., one teaspoon), we simply use the amount called for in the recipe. You can always add a bit more salt to taste. If however, the recipe calls for larger amounts of salt, as would be the case, for example, in a brine, then you should convert the amount called for. Most sources cite 2 types of kosher salt as being widely available: Morton (which is what we use) and Diamond Crystal (which none of us have ever been able to find.) In any case, to convert the amount of table salt to Morton Kosher Salt, multiply the table salt by 1.5; to convert to Diamond Crystal, multiply by 2.