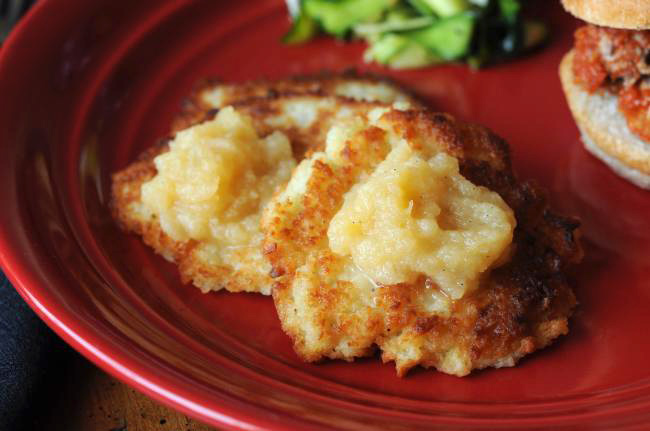 These are wonderful with the Grown-Up Applesauce

Line a colander with a kitchen towel. Stir 1½ cups onions, egg, salt, and pepper in a large bowl. Place the remaining ½ cup onions in a processor; add potatoes. Blend until potatoes are very finely chopped and some of the mixture is pureed; transfer to the prepared colander. Wrap the towel around the potatoes, squeezing out as much liquid as possible. Scrape into the bowl with the egg mixture. Stir in all-purpose flour and baking powder.

Heat 4 Tbs. vegetable oil in a heavy large skillet over medium-high heat. Drop the potato mixture by scant ¼ cupfuls into skillet; flatten each latke to a 2½-inch round with a metal spatula. Reduce the heat to medium. Cook until golden, about 4 minutes per side. Transfer to a large rimmed baking sheet. Repeat, adding more oil to the skillet as needed.

Latkes can be made 2 hours ahead up to this point.

Preheat the oven to 425°F. Bake the latkes until crisp and deep brown, about 6 minutes per side.

Marcella: Bon Appétit pairs the latkes with a Watercress, Smoked Salmon and Avocado Salad. Very few people in my family will eat smoked salmon, but the salad sounds wonderful:

Baby Shower, The Big Game
sign in to save to favorites

Kosher v. table salt
We always use kosher salt in our cooking because its crystals dissolve better in water than ordinary table salt. However, kosher and table salt are not equivalent when you are measuring amounts for a recipe. To further confuse matters, different types of kosher salt measure differently. If a recipe calls for table salt (or just salt), and the amounts are relatively small (e.g., one teaspoon), we simply use the amount called for in the recipe. You can always add a bit more salt to taste. If however, the recipe calls for larger amounts of salt, as would be the case, for example, in a brine, then you should convert the amount called for. Most sources cite 2 types of kosher salt as being widely available: Morton (which is what we use) and Diamond Crystal (which none of us have ever been able to find.) In any case, to convert the amount of table salt to Morton Kosher Salt, multiply the table salt by 1.5; to convert to Diamond Crystal, multiply by 2.