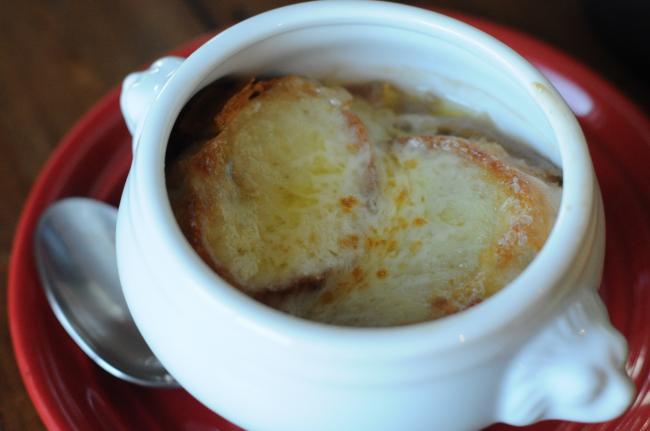 Comfort Food, Can Be Made Ahead, Beef

In a 4-quart pot over medium heat, melt the butter. Stir in the onions and season with 1 tsp. salt and ¼ tsp. pepper. Reduce the heat to low and press a piece of aluminum foil onto the onions so that they are covered completely. Cover the pot with a lid and cook, stirring occasionally, until the onions are very soft but not falling apart, about 45 minutes. Remove the lid and the foil, turn up the heat to medium high and stir in the sugar. Cook, stirring often, until deeply brown, 10-15 minutes.

Meanwhile, make the baguette toasts. Position a rack in the center of the oven and preheat the oven to 350°. Butter a rimmed baking sheet and arrange the baguette slices in a single layer. Bake until the bread is crispy and lightly browned, turning once, about 15 minutes. Set aside.

Add the broth and bay leaf to the caramelized onions and bring the soup to a boil over medium-high heat. Reduce the heat to medium-low and simmer for about 10 minutes to blend the flavors. Discard the bay leaf, and season to taste with salt and pepper.

Position a rack 6 inches from the broiler and preheat the broiler to high. Spoon the soup into broiler-proof soup bowls placed on a baking sheet, place two baguette slices on top of the soup in each bowl, and top with the shredded Gruyère. Broil until the cheese is melted and bubbly; serve immediately.

Both the soup and the baguette toasts can be made up to 2 days ahead. Store the soup in the refrigerator, and the toasts in an airtight container at room temperature.

Making the broth is really easy; we recommend that you do it. And a side benefit is an extra couple cups of beef broth for other meals.