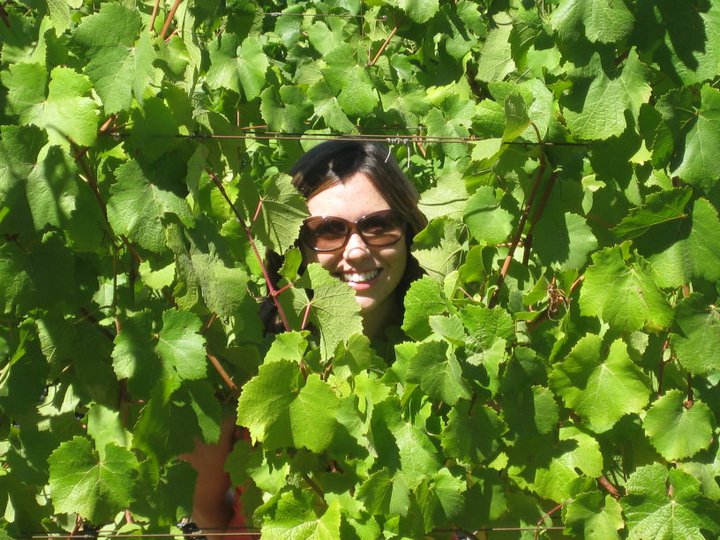 a little about me

I'm a thirty-something lawyer in Chicago. I'm not married but I have a very hungry, not picky boyfriend, Jason, who gets to be my guinea pig. I love to cook, but I also love to go to all kinds of restaurants. My favorite thing is a tasting menu with wine pairings! You may be wondering what my picture is about - I am standing in a vineyard in Napa, to show you my love for wine. I have a nice roofdeck on my condo so in the summer I like to make a bunch of salads and dips and grill for people on the roof.

I am a "do your best" cook. I don't get hung up on details or making anything perfect. If something calls for sour cream and the closest thing I have is 2% milk, so be it. If it calls for fresh oregano and I don't have any, I'm certainly not making a special trip to the store to pick up one thing, so I'll use dried. This type of substitution is dangerous in baking, which is more of a science. Good thing I rarely bake. And if it doesn't come out perfectly, I always know that Jason will eat it because he's such a good sport. I'm also a big meat eater, so pretty much every meal I cook will have some kind of meat or fish.

I would call my style contemporary, with a traditional slant. I don't have fancy tables and am more likely to use placemats than a table cloth. Because of my summer entertaining, I have a ton of large shallow bowls, platters, small dip bowls - everything I need to entertain - generally colorful and mismatched.

An Experiment with Oven Fries

Tonight I decided to make Oven Fries, which I have enjoyed at my mom's house more than I can count. She is always declaring how easy they are, so I was excited to pick up a potato and have fries in just a few minutes. But when I read the recipe, I found that I had to parboil the potatoes first. I tend to avoid recipes that have two steps like this, particularly for a side dish - at least on weekdays when I am trying to get dinner finished quickly (I have a very hungry boyfriend). In fact, I have thrown out a few brussel sprout recipes that required parboiling (also why this one is my favorite) .

So, the only thing to do was try the recipe without parboiling the potatoes first. I thought I would beat the system by cutting the potatoes very small (think McDonald's). Because I knew this was a risky experiment and really did want the fries, I also followed the recipe for the majority of the sliced potatoes, but cut them all smaller than the recipe called for.

I observed the following:
- the "experiment fries" browned about twice as fast as the regular ones (which seemed like a bonus), didn't absorb the olive oil so tasted really bland and were somewhere between crispy and cardboard-y. Even with a lot of ketchup, they were only tolerable.
- it is a very bad idea to cut the fries very small because they fall apart when you parboil them and you have to flip each one of them individually! Ideally the fries would be on the wider side, but not very thick (you are only going to flip once, so only two sides will brown well).

In conclusion, my experiment failed. And the parboiling wasn't so bad. And the (real) fries were incredible. And my mother is always right.

The French know what they are doing when it comes to cooking. One of the staples in French stocks, soups and stews is a combination of ingredients known as "mirepoix". Mirepoix is a mixture of onions, celery and carrot, roughly chopped or diced, depending on your use. These ingredients are also commonly referred to as "aromatics".

Try using mirepoix to create our favorite chicken stock recipe [add link once recipe is entered]. For this recipe, we suggest roughly chopping the ingredients. Peel the onion and cut into large pieces; leave the leaves on the celery and cut into chunks; wash but do not peel the carrot and cut into chunks. A rough guideline is 50% onion, 25% celery and 25% carrot (try 1 1/2 onions, 1 celery stalk and 1 large carrot).

Heading out to the fish market?

I wanted to share a few quick tips on choosing the perfect fresh, whole fish. Don't be intimidated - whole fish can be fresher than fileted fish, and allow for a great presentation - whether you filet the fish yourself or cook it whole.

1. The most important thing to watch out for when picking out a fish is the smell. Does it smell like the sea? Good - that's what we want fish to smell like. Does it smell fishy or rotten? You can guess this is not what we are looking for.

2. Avoid fish with cloudy eyes, particularly if the eyes are sunken and cloudy white.

3. The flesh of the fish should be fairly firm to the touch (not soft). Your finger should not leave an imprint.

4. The gills should be clean and bright red.

5. Ideally, the fish is "gutted" or "dressed", e.g., its entrails have been removed. Fish spoil much faster with their entrails intact. If you buy a fish that has not been gutted, remove the entrails yourself before putting the fish in the refrigerator.

6. Don't be shy. Ask the person behind the seafood counter which fish is the most fresh.

When I was 11, my parents took us on a two week trip to Europe. We arrived in Paris, and after a few days, the kids had had enough of French cuisine. How many croissants can one girl eat? Okay, a lot, but still. Finally, my mom allowed me to order a hamburger at a French restaurant. To their credit, they weren’t desperate enough at that point to give in and take us to McDonalds. My hamburger arrived raw (or almost) with a fried egg on top of it. I was so grossed out that I couldn’t eat it and probably shed a few tears over the whole ordeal. (Editors note: I love fried eggs these days and this burger, assuming it was actually more like rare/medium rare, sounds like a dream)

We also coined a family favorite during these first days in Paris. Bob had ordered French onion soup and was raving about it. I knew of French onion soup from Ruby Tuesdays or somewhere else embarrassing, so I had to have a taste. I asked Bob if I could try it. He said no, because I didn’t have a spoon. My carefree eleven-year old self suggested that I just use his spoon – we were family, after all. Bob was disgusted and informed us that sharing spoons is “barbaric”. We still make fun of him for it. He’s obviously classier than the rest of us.

After our week in France, we boarded a ferry to take us to England (this was pre-Chunnel, obviously). On this ferry, I had what I called the “best meal of the trip” and I think about it to this day. I went to the counter at the ferry cafeteria and ordered chicken kiev. It arrived hot and in a plastic wrapper that it had been heated up in (probably in the microwave). Mom, chime in if I am making up the wrapper, but this is how I remember it. I cut the chicken open and a wonderful, herb-filled butter sauce filled my plate. I ate the entire thing and wished for another.

I have not eaten Chicken Kiev since that magical ferry. I am hoping someone out there can make my (chicken kiev) dreams come true and give me a great recipe for chicken kiev. Does it really have an herb butter sauce?

I have always like to cook for people. In law school, I used to have “a few friends over for dinner” and it would turn into 25 people crammed into my living room trying to eat Pat’s Chicken standing up. The girls will fondly (who am I kidding) remember standing over my dresser in my bedroom peeling potatoes because the kitchen was tiny and full of people performing activities that required the stove or sink.

One of my party staples is requiring guests to pitch in. You know how people say “need any help?” as a courtesy on their way to grab a drink? I pretend they are serious and hand them a knife and a task. In some cases, it’s a whole list of tasks, like creating meatball sliders and the accompanying marinara sauce (I’ll never be forgiven for that one). If someone is rude enough to not ask to help, they will still get a utensil and a task. It’s part of the fun. I’m not above asking someone I just met, or a guy with a cast on one wrist (I’ve done both).

As if putting my guests to work is not already obnoxious enough, I am also very strict about how they execute the tasks. This is my mom’s fault. If you are tasked with chopping tomatoes for a salad, the tomato must be deseeded (I’m not as crazy as my mom and don’t peel my tomatoes). If you get the cucumber, it must not only be peeled and seeded, but it must be diced into the same size chunks as the tomato. My salads do not include half moon shaped cucumbers. Don’t ask.

I understand that people are not coming to a party hoping to ruin their outfit when the oil spatters on it or cut their finger while chopping, but to me, it’s a fun activity we can all do together. It certainly helps avoid the awkward moments when the first guests arrive and they are people I hardly know and have little to say to.

I am not advocating this for the rest of the world. All toasty is teaching me to choose items that can be made or prepped ahead of time and follow the timelines we have put together.

Everything Is Better With Melted Cheese

I love sandwiches with melted cheese on them. In college (Georgetown), the overwhelming majority of my non-dining hall meals were turkey and American subs from Wisemillers (a convenience store that had a grill in the back and made incredible subs) and hot turkey and American wraps from Booeymongers (think sandwiches and $5 pitchers of beer).

When I became old enough to make my own melts (aka law school when there were not great melt choices), I still concentrated on turkey and American, and threw in some grilled cheeses, tuna melts and egg sandwiches. My melt tips and instructions are below.

Generic Melt Tips:
1. I am always trying to be healthy (at least when cooking for myself), so I use Pam on the outside of each piece of bread instead of butter. Of course, butter tastes better but Pam is a pretty good substitute and it is not greasy.
2. If you are desperate and only have hamburger buns to use for bread (yes, this happened to me last week), flip the bun “inside out” so the inside of the bun faces the pan. Of course, spray it with Pam (or use butter if you are skinny).
3. My favorite cheese for melts is white American (try Land-o-Lakes from the deli counter or Applegate organic, in a package). To make a healthier version, I use Kraft 2% (yellow) American. It’s low in fat and calories but still melts nicely. 4. The first side will take about 5 minutes to cook, but after you flip the sandwich, the second side will only take 1-2 minutes. Be careful not to burn!

I’ll be writing about my favorite melts in the future.