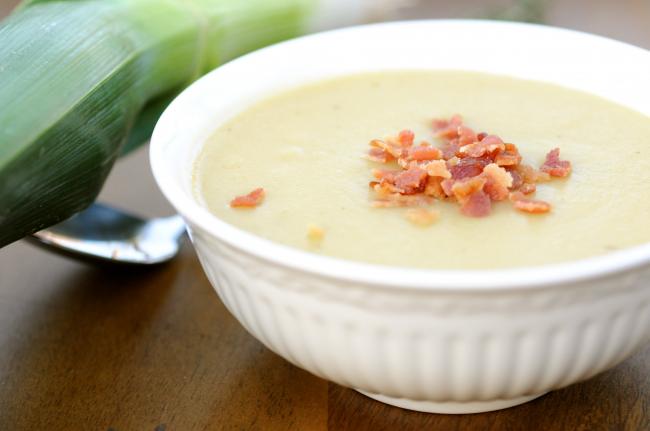 Can Be Made Ahead

Bring the dark green pieces, the broth, and the water to a boil in a large saucepan over high heat; reduce heat to low, cover and simmer for 20 minutes. Strain the broth through a fine mesh strainer into a bowl, pressing on the solids to extract as much liquid as possible. Set aside. Discard solids; rinse saucepan.

Place the rinsed saucepan over medium-low heat and melt the butter. When the butter foams, add the sliced leeks, the onion, and 1 teaspoon salt. Reduce the heat to low and cook, stirring frequently, until the vegetables are tender, about 10 minutes.

Increase the heat to high and add the reserved broth, potato, bay leaf, and the herb sprig and bring to a boil. Reduce the heat to low, and simmer until the potatoes are tender, about 10 minutes. Add the toasted bread and cook until the bread begins to fall apart, about 5 minutes.

Remove and discard the bay leaf and the herb sprig and, in a blender or food processor, in batches, purée the soup until smooth. Return the soup to the pan and bring to a simmer; season with salt and pepper to taste, and serve with a garnish.

Cook's Illustrated suggests a garnish of fried leeks prepared as follows: Take 1 medium leek, white and light green parts only, halve it lengthwise, wash it, and cut it into very thin 2-inch long strips. Toss the leeks with 2 tablespoons unbleached all-purpose flour, and a pinch each of salt and pepper. Heat ½ cup of olive oil in a 12-inch skillet until shimmering. Add half the leeks and fry, stirring often, until they turn golden brown, about 6 minutes. Transfer with a slotted spoon to a paper towel-lined plate and sprinkle with salt and pepper. Repeat with the other half of the leeks.

Some other suggestions for garnish are crumbled bacon, a bit of sour cream, or chopped chives. We are always all over the bacon garnish.

The soup can be made a day or two ahead and kept refrigerated until ready to use. Simply reheat it, thinning it with a bit of chicken broth if it is too thick.

If you have an immersion blender, you can use it to purée the soup right in the pan.

We like to serve this soup in small espresso cups or glasses (2 or 3 ounces each) as an appetizer.

Trimming asparagus
When you are prepping asparagus, instead of cutting off the ends, break them with your hands. The asparagus will break in the correct place.
Chopping basil 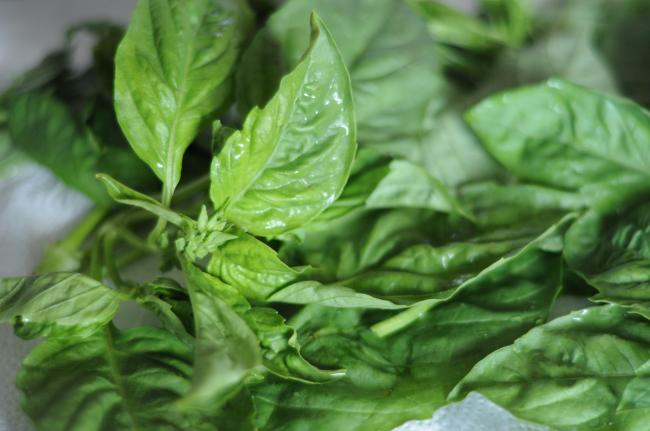 To slice or mince basil easily, make a pile of all of the basil leaves, with the largest leaves on the bottom. Roll up the leaves to form a cigarette shape. Slice the basil in 1/8 inch slices, which will give you a chiffonade. If you want the basil minced, simply cut the slices crosswise.
What is it? 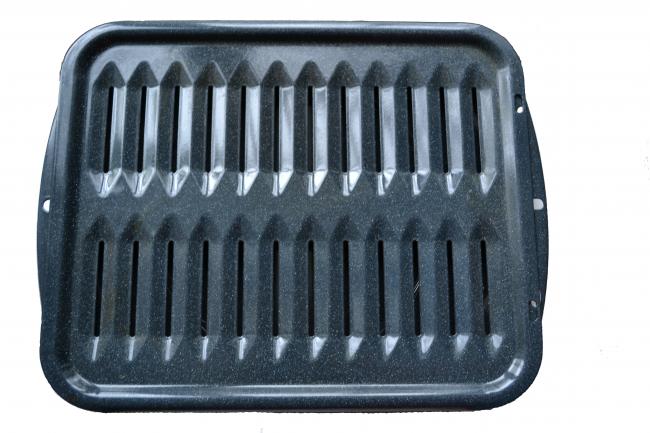 A broiler pan is the blue or black pan that comes with your oven. It has a top piece, which is slotted, and a bottom piece, to catch anything that falls through. If you had no idea what it was and threw it away, or you live in an apartment and the prior tenant left it so disgusting that you don't want to use it (which has happened to me), you can always buy a new one. And the new ones aren't always that blue or black spotted variety!

You can use this pan when you are broiling something (for example, our bacon-wrapped sea scallops) or anytime you are cooking something in the oven that will produce juices or fat when cooked, like steak or burgers.

It is a good time saving tip to line the bottom of the broiler pan with tin foil to catch the liquids and reduce cleaning time.

We always cook with unsalted butter. Salted butter is usually less fresh than unsalted, and the salt can be used to mask inferior flavors. Also, manufacturers add different amounts of salt to their butter, so it is difficult to control the amount of salt in your recipe. In a pinch, you can use salted butter in a savory recipe, but we would not recommend using it for baking.
De-seeding a cucumber
To de-seed a cucumber, cut the cucumber in half, the long way, then scoop out the seeds with a spoon.
Making fresh bread crumbs
Fresh breadcrumbs are a cinch to make, and are incomparably better than the dried, canned breadcrumbs. Simply tear the appropriate amount of bread into pieces, put in a food processor, and process until you have the proper size breadcrumbs. You can either cut off the crusts before processing or not—most recipes will specify if you should remove the crusts, and if the crust is especially crisp, it may not process well. One slice of regular sandwich bread will make about 1 cup of breadcrumbs.

If your recipe calls for dried breadcrumbs, simply put the fresh breadcrumbs in a 300° oven for 15-30 minutes until they are dried out. 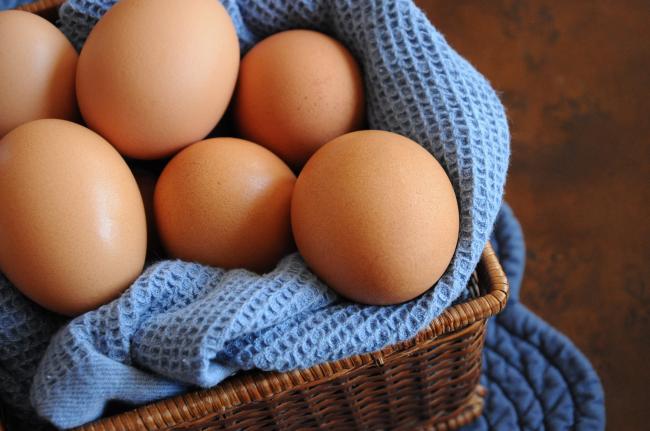 To cook hardboiled eggs with no green ring around the yolk (which occurs when the egg is cooked for too long or at too high a temperature), place the eggs in a pan large enough to hold them in a single layer and cover them with cold water by an inch. Bring to a boil, and as soon as the water boils, cover the pan and remove it from the heat. Let the eggs sit in the covered pan for about 15 minutes, then peel. (Thanks, Jane!)

Marcella spends several months a year in the Colorado Rockies at about 7500 feet. Because water boils at a lower temperature at altitude, you must keep the egg in the hot water for a longer period of time. At 7500 feet, add about half again as much time, so keep the egg in the water for between 20-25 minutes. You will have to experiment at different altitudes.

Fresher eggs are harder to peel, so try to use older eggs when hard-boiling.
Choosing an Olive Oil
If a recipe calls for olive oil, you may substitute extra virgin olive oil; but if it calls for extra virgin olive oil, we do not suggest substituting any other type of olive oil.
to partially boil...sort of
Parboil means to partially cook something by boiling it. Easy enough, right? Sometimes recipes (like this one) will call for you to boil something until it is partially cooked. Then you can finish the cooking using another method, such as baking or stir-frying. Potatoes and brussel sprouts are often parboiled in recipes.
Kosher v. table salt
We always use kosher salt in our cooking because its crystals dissolve better in water than ordinary table salt. However, kosher and table salt are not equivalent when you are measuring amounts for a recipe. To further confuse matters, different types of kosher salt measure differently. If a recipe calls for table salt (or just salt), and the amounts are relatively small (e.g., one teaspoon), we simply use the amount called for in the recipe. You can always add a bit more salt to taste. If however, the recipe calls for larger amounts of salt, as would be the case, for example, in a brine, then you should convert the amount called for. Most sources cite 2 types of kosher salt as being widely available: Morton (which is what we use) and Diamond Crystal (which none of us have ever been able to find.) In any case, to convert the amount of table salt to Morton Kosher Salt, multiply the table salt by 1.5; to convert to Diamond Crystal, multiply by 2.

How to scald milk
To scald milk, simply heat it over medium heat, stirring, until bubbles begin to form around the edge of the pan. Always use a heavy bottomed pan to scald milk. Scalding used to be necessary to destroy harmful bacteria and enzymes in milk. That is no longer necessary, but scalding is still used in some recipes to bring out the flavor of certain ingredients like vanilla bean, citrus, and cinnamon, and to melt butter.
Storing tomatoes 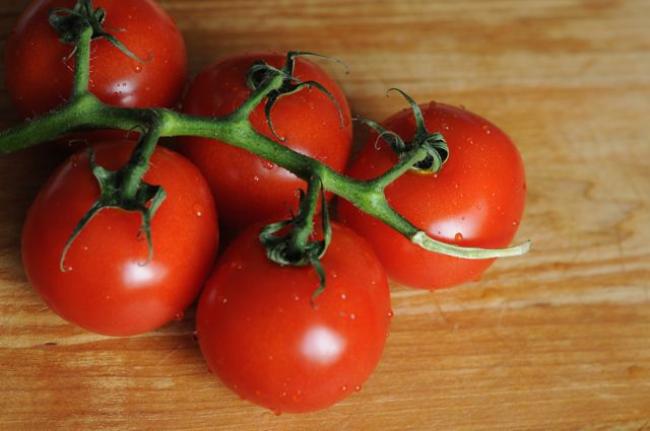 Never store a tomato in the refrigerator. If you slice a tomato and don't use all of it, place the tomato upside down on a plate. Store the plate on the counter for up to 1 day.
Peeling a tomato

To peel a tomato, bring a large pot of water to a boil. Cut an "X" in the bottom of the tomato, and place it in the boiling water for 30-60 seconds. If the tomato is not really ripe, it may take longer-- watch for the skin around the X to start to come loose. Place the tomato in a bowl of ice water, leave for about a minute, then remove. The skin should peel right off. If you only have a few tomatoes to peel, it's probably easier to simply use a vegetable peeler.
De-seeding a tomato

To de-seed a tomato, cut it in half crosswise (lengthwise if you are using a plum tomato.) Holding the tomato over the sink or the garbage, scoop out the seeds in each of the cavities with your little finger.