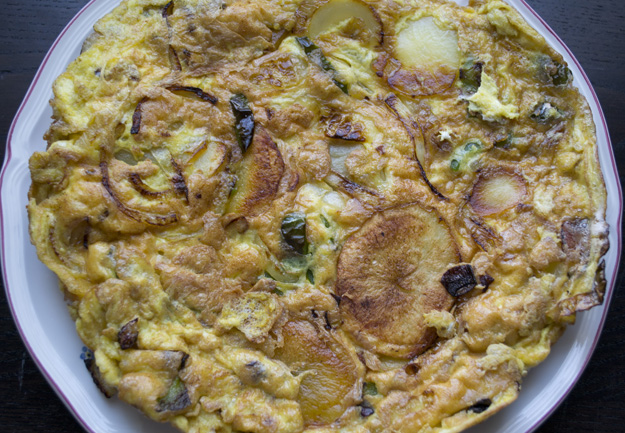 Tortilla Española is a common tapa (small plate) eaten in Spain. It is essentially an omelette with potatoes, onions and sometimes peppers. There are no "tortillas" (as Americans think of them) involved. In Spain it is often eaten cold, sometimes between two pieces of crusty french bread as a sandwich and not necessarily for breakfast.

Peel the potato and cut into 1/8 inch slices. Peel the onion and cut into 1/4 inch slices. Then cut the slices in half. Dice the green pepper into 1 inch strips. Add the olive oil to a non-stick pan and turn on high. When the oil begins to bubble, add the potatoes. Stir and flip the potatoes frequently with tongs. They will cook quickly and brown a little because they are so thin.

When the potatoes are almost soft, add the onions and peppers and turn the heat to medium. Continue to stir for 3-4 more minutes. Do not let the potatoes get darker than golden brown - turn down the heat if necessary. The onions do not need to be fully cooked because they will continue to cook once you add the eggs.

While the potatoes, onions and green peppers are cooking, crack all of the eggs into a prep bowl. Add the salt and scramble the eggs with a fork until they are well mixed.

Pour out most of the oil by taking the pan to the sink and draining what you can without letting the contents of the pan spill out. Pour the egg mixture over the potatoes, onions and green peppers. There is enough oil remaining that it shouldn't stick at all.

Cook on medium with a lid for about five minutes, until the bottom is set and slightly brown. Now for the hard part. Get a large plate or a large, shallow bowl (similar to one you might serve pasta out of), place it over the frying pan and flip the tortilla onto it. Return the tortilla to the pan and cook on the other side until nicely browned.