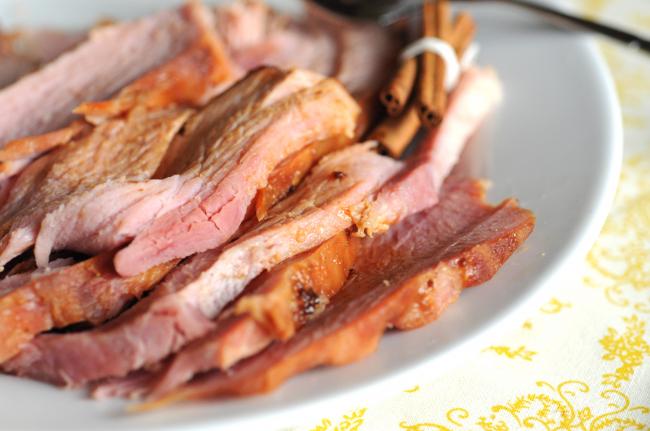 For the ham, combine 3 cups orange juice, cinnamon stick, and cloves in a roasting pan; set aside.

For the glaze, heat 1 cup orange juice, agave, marmalade, Dijon, whole-grain mustard, and allspice in a small saucepan over medium; reduce until syrupy, 20-30 minutes, then set aside or chill.

Preheat oven to 300° with oven rack on the bottom. Place ham, cut side down, on a roasting rack set inside the roasting pan.

Brush one-third of the glaze on the ham; seal the pan tightly with foil.

Roast ham until an instant-read thermometer inserted into the thickest part of the ham registers 100°, about 15 minutes per pound (1½-2 hours).

Remove ham from oven; increase temperature to 425°. Brush ham with half of remaining glaze and return to the oven, uncovered. Continue roasting until an instant-read thermometer registers 110°, about 20 minutes more.

Transfer ham to cutting board, brush with remaining foil, and let rest about 15 minutes before serving.